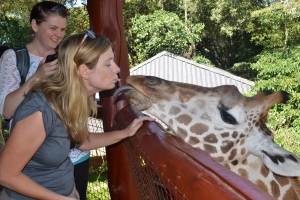 I know it’s a little bizarre to say that I took a resort vacation to Chad, one of those forgotten Central African countries.  But that’s the way it worked out.   With daily temperatures of 40C + (105F+), hazy Sahara dust skies and crazy expensive prices, it’s not the most obvious of tourist destinations (or even adventure traveler destinations) but my friends Peter (of London Puts on the Games fame) and Claire work there in the burgeoning oil industry so I popped over for a quick visit.

After the sprawl of Addis Ababa in Ethiopia, the compact capital of N’Djamena felt eminently manageable and when people responded graciously to my terrible French, I decided that this was a place I liked (I also liked the cute little lizards everywhere).    The feeling was further solidified when I discovered the food – without exception every single meal I had in N’Djamena was outstanding.  In the interests of full disclosure, I only ate at the handful of expat restaurants in the city but I gorged on long forgotten pleasures such as escargot, hummus, fresh spring rolls, cheese paninis and mouth-watering mango sorbet.  Accompanied by lovely French wines.   Combine the food, the wine, the English movie channel in my room (another long-lost pleasure), the pool-side lounging (far too hot to be out and about), the mani/pedi and the many campari sodas shared with great company, and it felt just like being at a resort.

That is, if you ignore small details like the riot police at the airport on arrival, the fighter jets taking off every morning at 6am, the steel double doors on your hotel room, the need to register with the police upon arrival in the country and the fact that you are forbidden from taking photographs – any photographs – in the capital.  To ensure I got some photos (and to remind myself that I am traveling, not vacationing), I took a visit to Gauoi, a small village outside of the city that is said to have been the capital of the Sao civilization (a race of giants).  The Gauoi of today is famous (well in Chad at least) for its colorfully painted mud houses and famous pottery jugs.

As you can tell, Chad is definitely no ordinary destination.   But I was impressed by the way the country has rallied since the end of the civil war in 2008, fuelled by oil and Chinese infrastructure investment.   A big thank you to Peter and Claire for their hospitality and great company.

My next stop, Rwanda, couldn’t have been more different.   Chad’s dusty brown plains were contrasted with a verdant sea of green – Rwanda is known as the “land of a thousand hills” and they are all lush and tropical, resulting in a truly beautiful country.   And, to my absolute delight, those tropical trees produce an abundance of passion fruit, one of my favorites.  Unfortunately, the passionfruit was as far as it got when it came to being excited about the food and I longed for Chad’s efficient service when most of our meals in Rwanda (outside of Kigali, the capital) took at least two hours to arrive.

At the same time, I was incredibly impressed with the reunification that has occurred after the horrific 1994 genocide (one million people killed in one hundred days).   Rwanda has pursued a “unity” theme and Rwandans no longer identify themselves as Hutu or Tutsi (the ethnic groups that waged civil war) but simply as Rwandans.  With an active campaign against corruption, the banning of plastic bags and articulate, confident university educated youngsters, the country is an African success story and has a bright future.    Even with a visit to the moving Memorial and a stay at the hotel depicted in the movie Hotel Rwanda, it’s now difficult to conceive of the tragedies while enjoying the leafy streets of modern Kigali, one of the nicest cities in Africa.

Interestingly, Burundi (where I also spent a few days) also suffered terrible ethnic violence but has taken a different route to peace with debate over differences encouraged.  These days, however, people are more concerned about government corruption than ethnic rivalries.    But with the same beautiful hills as Rwanda, famous musicians (Les Tambourines) and some of the best inland lake beaches (Lac Tanganyika) on the continent, Burundi has it’s own pleasures.

Of course, Rwanda is also famous for its mountain gorillas and Dian Fossey of Gorillas in the Mist fame spent most of her life here tracking the majestic animals.   My friend Amee (yes – once again on vacation in Africa – this was our fifth African country together in as many months!) and her colleague Ann battled mud and vines to track them.  I contented myself with cheeky furry faced golden monkeys (also indigenous to the region) and inspecting fancy hotels.

I was saving my gorilla experience for Uganda with my friend Sandy, who flew in from Toronto.  And what an experience it was.   Standing mere metres from these magnificent relatives of ours (98% of our DNA is shared) was awe-inspiring.  And seeing the huge silverback and multiple babies added to the enjoyment. Hacking our way up and down through the jungle (often on all fours) to reach them was also quite the experience.

Standing close to wild animals became a theme in Uganda.    We did the same with “white” rhinos (mistakenly named after a translation problem from “wide” mouthed rhinos) and chimpanzees.   While the rhinos mostly slept and lumbered slowly around, the chimps were very social.  In fact, so much so that we had the pleasure of observing chimp sex – all 3 seconds of it.     Apparently the more virulent males can last up to 5 seconds. To make up for that, the females get to choose their male partners and can copulate with different partners up to 8 times a day!  Although sometimes they choose one partner and whisk him away for a 7 day “honeymoon”.

Back at our jungle camps, we were always avoiding warthogs and hippos as we made our way to our safari tents.   But we stayed a safe distance from the elephants, buffalo, giraffes and (rarely spotted) hyenas we saw on boat cruises, game drives and non-game drives (where Sandy showed an uncanny ability to spot a range of animals).   The lions hid from us (including the unique tree-climbing lions) but were seen by many others we met.    Still on the wildlife theme, I discovered a fondness for eating chili grasshoppers – nicely spiced with a satisfying crunch!

Complementing our wildlife extravaganza with a visit to Murchison Falls (the most powerful waterfall in the world as it thunders through a 7m gap)  and finishing with a couple of days of R&R at the gorgeous Lake Bunyoni (where Sandy’s canoe paddling skills were also appreciated), we certainly understood why Churchill called Uganda “The Pearl of Africa”.    It’s a wonderful country to visit;  Sandy – glad I got to discover it with you!

I’m now in Nairobi, Kenya  (popularly known as Nairobbery – for a reason) but its violent reputation seems overshadowed by a modern thriving metropolis – gleaming skyscrapers, central green parks, a ban on smoking on the streets and the machinations of business.  Particularly fascinating is the prevalence of mobile money – 60% of the GDP circulates the country via text message.    But I’ve mostly left business for another time and spent my time here visiting elephant orphanages and kissing giraffes – they have rough sloppy tongues!

Next stop, northern Mozambique for some diving, then Singapore to visit friends and back to Oz to see friends and family.   Looking forward to seeing many of you soon.

Click on any photo to launch a slideshow of the images.    I’ve discovered that I am no wildlife photographer – for much better gorilla photos, see Amee’s at www.ameechande.com/gallery/.