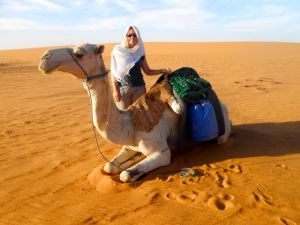 I was given my Arabic name on my second day in Sudan.  Wandering the camel market outside Khartoum with Michael, the guide on my upcoming camel trek across the desert, he politely asked me if I was known by any other name.   Reserving “Nicole” for French and “Nik/Nikster/NikNik” for those who choose them, I replied that I wasn’t and enquired why.   Michael delicately explained that “Nikki” was a difficult word in Arabic.  When pressed, he admitted it meant “f&*k” and hoped I wasn’t offended.  I, of course, found this hilarious and, when I stopped laughing, immediately asked Bala, our head camel man, to give me a more appropriate name.  And so I was Aisha.

Our camel trek was a 280km, 10 day journey across the Bayuda Desert where it curves between two twists in the Nile, part of the Libyan Desert (Eastern Sahara) and the larger Saharan Desert.    Organized by my favorite tour company, Secret Compass, the trip was conceived and led by Michael Asher, award-winning desert explorer, author, historian and ex British SAS.   If you’re looking for adventurous honeymoon ideas, Michael and his wife spent theirs on a 9 month journey becoming the first people to cross the entire Sahara by camel.   Michael also spent three years living with the nomads.   So this guy knows camels and the desert.

While the attraction for me was the chance to spend some time in a remote and rarely visited part of the world as well as to experience a way of life little changed for thousands of years, our journey also had historical significance as we traced (backwards) the route of the British Camel Corps as they marched to Khartoum in 1885 (to try to rescue Gordon if you know your British military history).   It was quite surreal to stand on a bleak plateau amongst hundreds of British and Sudanese rock graves from one of their battles.

In fact, the whole experience of spending that long in the desert was quite surreal.   The diversity of the landscape surprised me – thorny acacia scrub, desolate dark stone plateaus, ribbons of green wadis and one particularly beautiful day through rolling ochre sand dunes and golden sand plains.  That night we camped in the cranny of a rock enclave complete with a crystal clear water pool hidden high above it and reached through a rock scramble in the dark.   Throughout, we carried our water in jerrycans on the camels, topping up along the way at traditional wells that have been used by the desert nomads for centuries, including one powered by donkeys and a pulley system.

Our days took on a reliable repetitiveness…wake at first light, breakfast, ride, walk, ride, collapse into the shade of a tree for a couple of hours break at lunch in the searing 40c (105F) temperatures.  Repeat in the afternoon.   Then in the cool of the early evening, take our mattresses from our camels back and throw them on the sand to create our beds.   The simplicity and rhythm were calming and the immensity of nothingness surrounding us simultaneously reflected the enormity of the world and our insignificance in it.  Yet it heightened my senses for the small things – a purple flower on a single green shoot, the dark swirl of pattern in the sand, the myriad shades of green in a thorny scrub.   And, at night, as we lay open under the dense coverlet of stars, we watched their nightly march and the waxing of the moon – incredible natural daily changes that I rarely notice other places.

Unexpectedly, even the movement of the camel was meditative with a gentle rocking that soothes your soul as the landscape unfurls around you.  If you’ve ever ridden a camel, you will know that they are not the most comfortable of creatures.   However, it is possible to achieve camel riding mastery that will allow you to ride for hours at a time.   My trusty steed was named Modabay and, while we had a few issues to begin with, I became quite fond of him and developed a great respect for the extraordinary creature that is the camel – so incredibly well adapted to their environment

The first step in camel mastery, and often the most difficult, is being able to get on and off.  It took me a while to get this right.   Try 1 – Get up just fine but the camel absolutely refuses to sit down to let me off, despite vigorous yanking and shouting from the camel men.  I am told that the camel knows when I am serious and that helpless laughter is not conducive to camel mastery.   Try 2 – the eager Modabay rises before I am fully on and I end up hanging, split legged from his back to the ground before being rescued by a camel man.  Try 3 – I get up but promptly fall forward over the saddle and find myself dangling desperately from Modabay’s neck until I am, once again, rescued.

Luckily, I managed to master getting on and off after this (although it was never my favorite time) and felt quite smug on the second day when I graduated to riding with my legs crossed in front on the camel’s neck (the most comfortable and sophisticated position) accompanied by an authentic “chck, chck” tut to encourage the camel.  In search of comfort, we obsessed all day over the position and padding of our saddles and I was forever grateful for my thick blanket, purchased at the local market as a sleeping bag stand-in, that provided me with probably the most comfortable ride in the group.   Unfortunately one of our team mates wasn’t so lucky in his camel mastery and he and his daughter left the trek on Day 2 after he fell getting on his camel.

Our journey ended with a quick visit to the little known but impressive Meroe pyramids and the Lion Temple – home to Nubian burial and religious sites from 300BC to 300 A.D – before heading back to Khartoum for a very welcome shower.   With diverse and interesting teammates (thanks for the memories to Liz, Helja, Rich, Tim, Benedict and Helen), the knowledgeable Michael, our cheerful camel men, our amazing cook and plenty of lively lunch and dinner table conversation, the trip was a unique glimpse into a world barely touched by others.

In fact, in some ways much of Sudan seemed that way.    Many of the Sudanese still wear tribal facial scars that indicate their clan, there are regular Sufi whirling dervish ceremonies and the tea, coffee, foul (bean stew) and T’aamiya (falafel) sellers seem to exist as they have for centuries.   Even English, despite being a former British colony, is little spoken outside of hotels and I delighted in picking up a few phrases of the poetic-like Arabic.    Khartoum, sitting at the confluence of the Blue and White Niles as they become one, boasts twisted steel Dubai-like towers, colonial architecture and thriving local markets and is probably the safest city in Africa.  I could hardly believe that I could walk around in the evening by myself.

However, my time in Sudan wasn’t all desert and city.   In fact, I spent the first week there surrounded by water, on the live-aboard dive boat Don Questo.  As it turns out, the Red Sea of Sudan is considered one of those more adventurous dive destinations which attracts very experienced divers and it was humbling to learn I was sharing the boat with people who had thousands of dives.  Even the 14 year old celebrated his 100th dive while we were there.      My companions were six fun-loving Belgians, an inspiring Russian father and son team who are diving and traveling their way to every country in the world and a great group of Italian and Sudanese staff who knew me as Aisha and were thrilled I had an Arabic name.

I knew it would be a fun trip when I learnt the Belgians had smuggled in litres of wine to alcohol-free Sudan – an act that I am still impressed by!   And a fun trip it was:  the reefs were beautiful –  pristine and teeming with colorful fish – so much so that I nicknamed some dives “It’s Raining Fish” and “360 Degree Fish” and we saw multitudes of moray eels, rays (including a manta), reef sharks and more.  The Umbria, scuttled in WW2, was a great wreck dive (complete with bombs, wine bottles, cars and Italian marble) and we also dove the village of Conshelf II where Jacques Costeau and his team spent a month living underwater in 1963 – a very surreal place.  I also got my Advanced certification, made a clandestine dive to 50m (inspired by the deep diving Belgians) and began my Sudanese routine of sleeping out under the stars.

After a unique three weeks in Sudan, it’s time for more adventures in Malawi and South Africa.  Stay tuned…

Click on any image to launch a slideshow of photos… 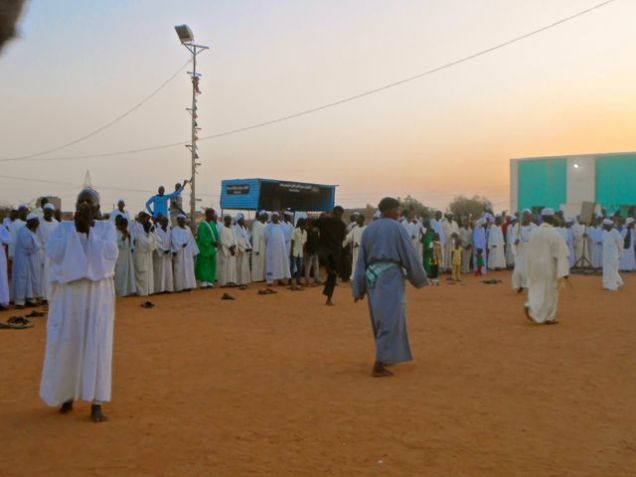 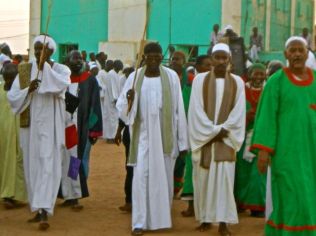 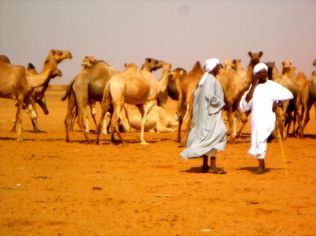 Michael at the camel market 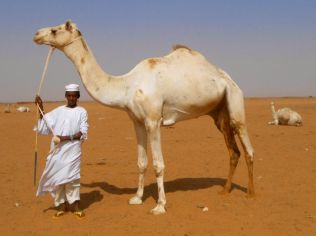 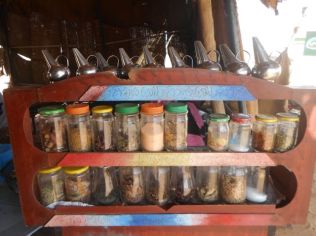 Coffee and tea is very important

Port Sudan – for the Sudanese tourists 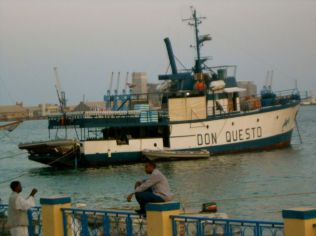 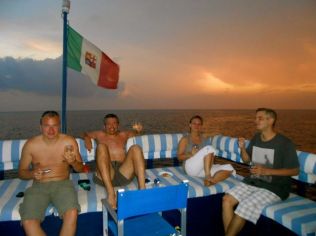 The Belgians (some of them)!

Sunset on the boat 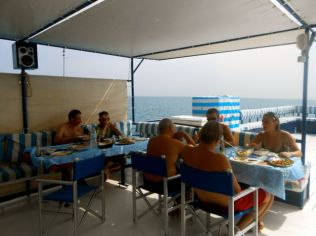 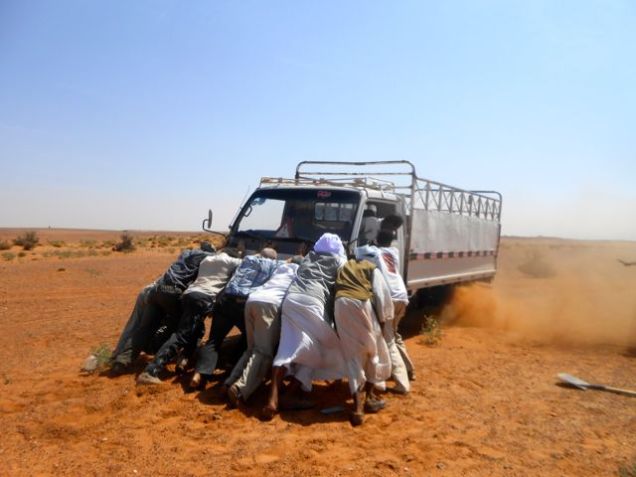 Camels are better than trucks in the desert… 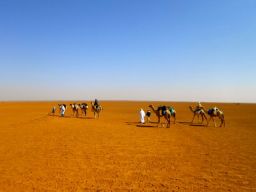 Setting off into the nothingness…

Camels drinking at the wells 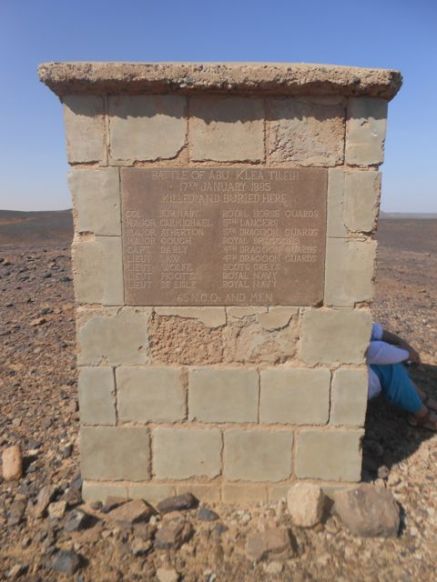 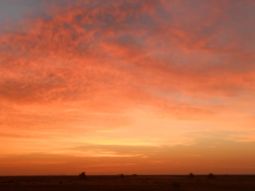 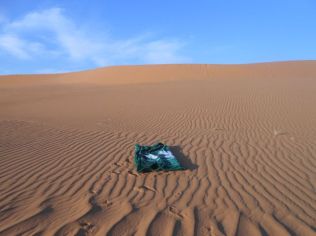 My bed for the night – literally! 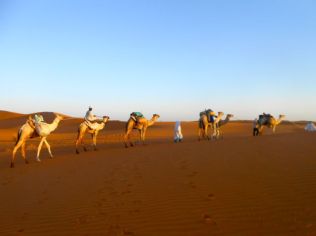 Dusk in the desert

Our lunch tent – for when there wasn’t enough shade

Inside the Lion Temple

← My life in Nairobi
Bikes, Wine and Cheetahs →