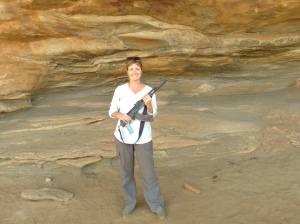 Only a couple of days after leaving West Africa it was quite surreal to find myself skiing in the midst of the Austrian Alps.   Mid February saw The Gang (getting more complete each time) back together again – this time hitting the slopes in St Anton for a week (after a wild introduction to Bavarian culture at a traditional Munich beer hall).      We lucked out with the best weather all season and some great runs on both the St Anton and Lech/Zurs slopes.

While I hadn’t really expected this to be a cultural vacation, it turns out that Austrian ski holidays offer all kinds of cultural interactions.   The most immediately obvious is the food – dessert is everywhere.   So much so that most people eat it as their main meal at lunch – I highly recommend kaiserschmarrn (kind of cut up pancakes) or the germknoedel (sweet yeast dumpling) – washed down with an apfelsaft (apple juice spritzer).    Back at the hotel, it took a little courage to work up to experiencing the traditional naked mixed gender sauna.   I finally did so but not before making absolutely sure I wouldn’t run into any of the male members of our group!

St Anton is famous (infamous?) for its après-ski scene and it certainly didn’t disappoint.   The cultural learnings continued fast and furious with the Flying Hirsch (stag) quickly becoming the drink of choice – it consists of placing a small bottle of yagermeister (yes – including bottle) in a small amount of Red Bull to be drunk as a shot     And who knew that there was an entire industry dedicated to creating songs especially for après-ski?   They are all in German but after a couple of Flying Hirsch’s it’s surprisingly easy to sing along at the top of your voice while stomping satisfactorily in your ski boots, quite likely while standing on a table.    It’s a good warm-up for the ski down from the bars afterwards; ironically probably the most dangerous thing I’ve done in this entire journey!    To The Gang – I had an absolutely amazing time as always and cannot wait to see all of you again in our next destination.

Then it was back to London for a week to catch up with friends, restock and revel in the luxuries of high speed internet, running hot water and pedicures.   Speaking of which, I am still a little in awe of running hot water…it just seems like such a modern miracle and I could be seen stroking hot taps in my friends houses and staring dumbfounded at the hot water coming out of it.    One of my favorite things about London (apart from the fact that some of my favorite people live there – you all know who you are) is that even more of my favorite people travel there and are sometimes in town when I am.   Kaiser and Sunny – it was so great to catch up with both of you after what seems like a very long time.  And Geri, Rupert, Lynne and Jo – loved us having a mini Gambia reunion in the London winter!

Having a week to spare before meeting my friend Anna in Ethiopia, I alighted on the idea of checking out neighboring Djibouti and Somaliland (well actually Anna had the idea but she is used to me stealing her holiday ideas!).     Djibouti is known for its kitesurfing and snorkeling with whale sharks but it was the wrong season for that so I spent two focused days checking out the interior of the country (it’s a very small country).   Having reached the highest point in Africa (Kilimanjaro at 5,895m) a few years ago, I can now say I’ve been to the lowest point (150m below sea level) at the salt lake of Lac Assah.

It’s a beautiful spot but I was even more impressed with Lac Abbe.   With thousands of limestone “chimneys” surrounding the lake and lots of geothermal activity, it’s an otherwordly place – especially beautiful at sunset and sunrise – made all the more so because I was the only tourist around.  In fact, it’s where they filmed Planet of the  Apes back in the 60’s.    An unexpected bonus was lots of wildlife – warthogs, gazelles, camels (of course) and baboons all along the side of the road and thousands of pink flamingos greeting dawn on the lake.

The region is home to the local Afar nomads so I also stopped off in villages and even tried helping the women collect water from the wells they dig in the desert (harder than you think).   Women greet each other by kissing each others hands three times – it’s a charming greeting that deserves to be more widespread – no more awkward “which side of the face do you kiss on first” encounters.      A night back in downtown Djibouti Ville (full of bars and restaurants to serve the French and American military forces) and I left with that great feeling that comes from having zero expectations of a place and having them far surpassed.

Next came Somaliland.   Where?  Well Somaliland is a part of Somalia that broke away in 1991 (after Somalia disintegrated into mayhem) and formed its own government, flag, currency etc. with democratic elections and freedom of press – in short, a very safe, functioning, law abiding country.  They’ve been fighting for international recognition ever since but the international community prefers to deal with Somalia holistically and not a single country has recognized them.   As you can expect, they don’t see many tourists here – and certainly not solo female ones  (in fact everyone assumes I must be a journalist) – but that also means people are incredibly welcoming and friendly.

There is even world class sightseeing at the extremely well preserved and very impressive 5000 year old rock paintings of Las Geel.    The other attraction of Las Geel is that you get to hang out with a guy carrying a kalishnikov.   The government is very protective of foreigners and insists that you take an armed guard any time you leave the main city – just in case.   Even getting our permits for Las Geel was an adventure (by this time I had teamed up with Bjorn, a Dutch guy who was the only other traveler in town).  Looking for the Ministry of Tourism, we were given a lift by Kaysar, a friendly and interesting Somalilander who had lived in the UK.   In our effort to find the right building, we blithely interrupted a meeting being held by the actual Minister of Sports, Youth and Tourism.  No problem – he calmly gave us directions and chatted English football with us while Kaysar went to get the car. We ended up spending the rest of the day with Kaysar and that night he took us out to the best restaurant in town.

The next day, two women in my hotel lobby invite me to join them for tea.   Roda, a Somalilander living in Norway, was horrified to learn that I wasn’t visiting the sea-side town of Berbera, three hours away.   An hour later, she has arranged a car and driver and a police official to accompany us (so I have no questions about travel permits or armed guards at the police checks along the way).   Upon arrival I find that her cousin, Awaleh, has changed his plans to leave town for the weekend in order to show me around!  Berbera is a crumbling, atmospheric town perched on the edge of miles and miles of deserted beaches and Awaleh treats us to grilled fish and we paddle in the sea and pat the camels wandering around town before saying fond farewells (me with gifts in hand from both Roda and Awaleh).

Speaking of camels, another highlight was the chaotic camel and goat market, where I quickly became the star attraction.   And I disappointed a whole carload of women in my shared taxi from the border when I didn’t eat the coveted camel meat at the lunch we shared en-route (although they were impressed that I quickly realized I should put down my fork and eat with my hands).   In short, Somaliland is an undiscovered gem and an inspiration as to what a country can achieve with strong, dedicated leadership.   They truly deserve their independence.   And to Kaysar, Roda and Awaleh, your incredible hospitality, insights into Somaliland/Somalia and great company made a special place even more wonderful.   Thank you.

Click on any photo to launch a slideshow of the images…

Crazy surfing in the Munich winter 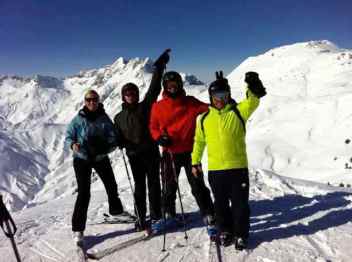 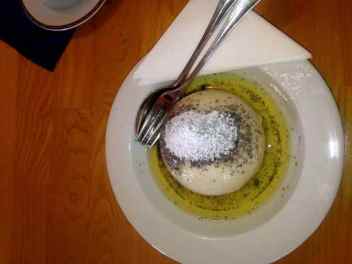 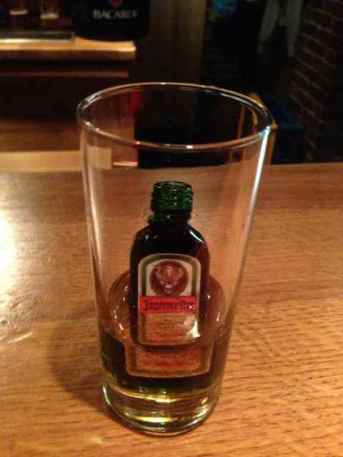 Helping with the water

The desert (and mirage) 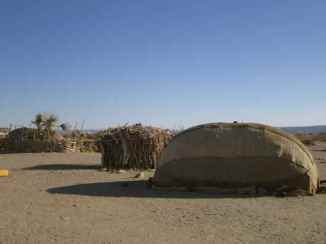 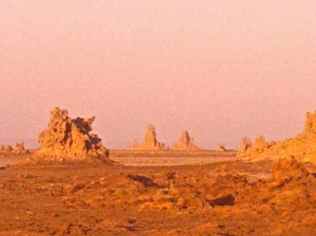 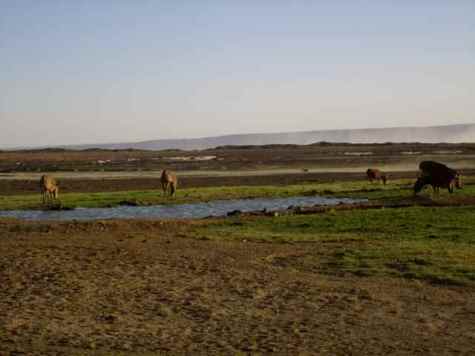 There is some greenery 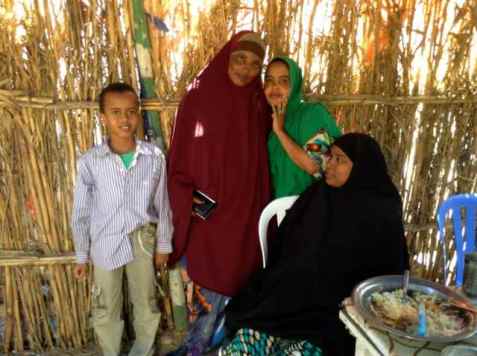 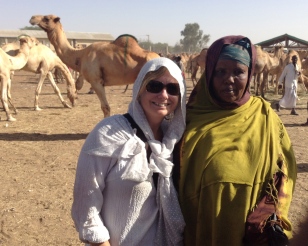 With a new friend 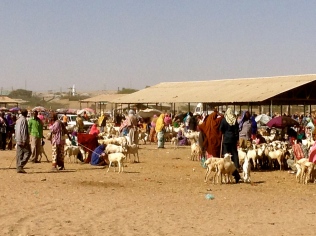 Henna is popular with men 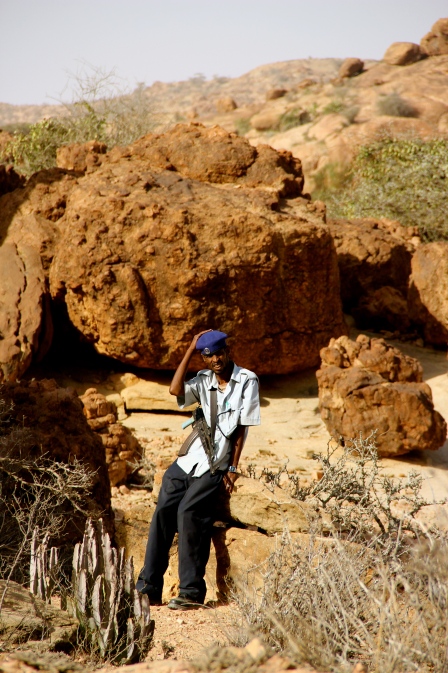 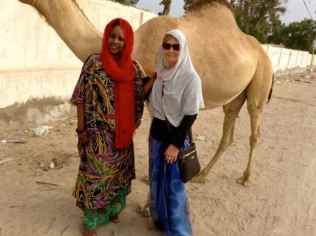 Minus the camel head 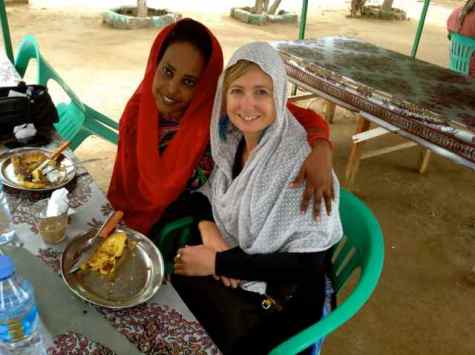 2 thoughts on “Kaiserschmarrn and Kalishnikovs”